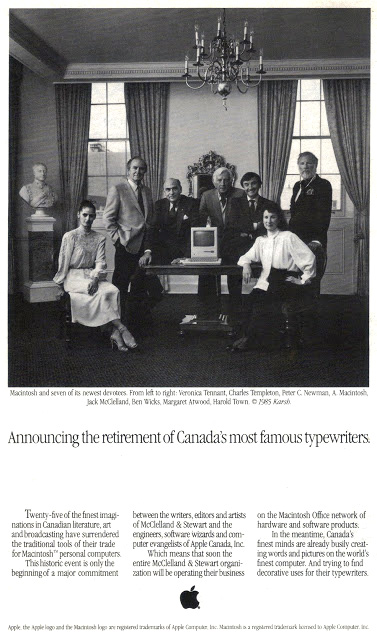 “Announcing the retirement of Canada’s most famous typewriters.”

In 1985, Yousuf Karsh was assigned to photograph a group of creatives for “Apple Canada, Inc.”: Veronica Tennant, Charles Templeton, Peter C. Newman, Jack McClelland, Ben Wicks, Margaret Atwood, and Harold Town. McClelland was one of the founders of the Canadian publishing company McClelland & Stewart (now owned by Penguin Random House of Canada) and the copy reads “Twenty-five of the finest imaginations in Canadian literature, art and broadcasting have surrendered the traditional tools of their trade for Macintosh™️ personal computers. This historic event is only the beginning of a major commitment between the writers, editors and artists of McClelland & Stewart and the engineers, softwarer wizards and computer evangelists of Apple Canada, Inc.”

Fast-forward and Apple was the first U.S. company to reach $1 trillion in value, which it did three years ago today, on August 2, 2018. It took just two more years to get to $2 trillion.